I haven’t written a Christmas letter in several years and wasn’t planning to this year either. However, as you open our card I think you will begin to see that this letter is just begging to be written. There are stories waiting to be told.

At some point in life you just have to stop fighting it and simply embrace the crazy. With three small children (Eeny 6, Meeny 4, and Miny 19 months) we simply have no choice. There is a backstory with this photo. We had the best laid plans to have a professional photographer come out and shoot a session with us. Alas, the scheduled morning brought with it torrential rains and historic floods that not only devastated but also paralyzed our city. Those of us who didn’t suffer major flooding were sequestered in our houses as roadways crumbled all over the city. Fortunately our house remained unscathed and untouched by the waters.

You would think we could just reschedule our photo shoot (which seemed so inconsequential in the wake of such devastation) but unfortunately we were against a hard deadline. Many of you know that the Hubs was diagnosed with Stage 3 Melanoma over the summer and he was set to begin chemotherapy the very next day. We knew that we had a long arduous road ahead of us and he would be unable to do many things over the next few months- much less deal with a family photo session.

So with the rains coming down all around us and the children out of school for a full week because of the flood damage we set up our tripod on the back porch and tried to capture the essence of our family. As you can imagine trying to get all three children to smile at the same time (much less look in the same direction) was proving near impossible. (And the outtakes from this particular session are hilarious if I do say so myself.) At some point during the struggle, the whining, the bribes, the threats, and the camera timer flashing at the most inopportune times we had an idea.

“Everybody make a crazy face on the count of three!!!”

And this was the shot we got. 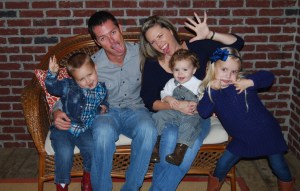 As we scrolled through all of the photos we took that night we realized that no single picture could sum up our lives more perfectly, more succinctly than this image.

Although there were 10 months leading up to the start of Hubs’ chemo (which began in October) I believe that his diagnosis and subsequent treatment will dominate our memories of 2015. Of course so many other things happened this year. Eeny (6) began first grade and entered “big school” for the first time. She became a Daisy (Girl Scout) and has been cheerleading on a competitive team. Meeny (4) is still in Montessori school with his eternally patient teachers. If nothing else he keeps us laughing with his shenanigans. Miny (19 months) keeps us on our toes by sneaking into bathrooms, climbing on the counters, and plopping himself in the sink while turning on the water.

There is always some emergency to attend to. Whether it was the time Meeny accidentally emptied the 5 gallon self watering dog bowl into the kitchen floor or the time the big dog pushed the little dog into the storm drain and I was forced to climb into the sewer to retrieve her. It’s always a story. A hilarious, messy, “I can’t make these things up” kind of story. And this leads me to why the baby’s name didn’t make it onto the Christmas card this year. Who knows what led me to flee my computer in the midst of ordering the most perfect card and to return so distracted and mind boggled I didn’t realize we left him off. I’m sure you can let your imagination run wild.

1. Much like the crazy family photo. Nothing. I repeat, nothing could sum us up better.

2. If you are “privileged” enough to be reading this it means you know us. It means you should expect nothing less than a card proudly announcing that “Family is Everything” while we promptly forgot to add our third child’s name. 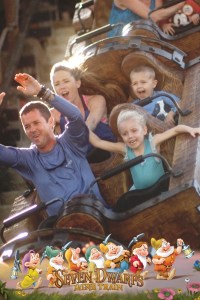 In between Hubs’ surgeries, recoveries, and the beginning of his chemotherapy we took a trip to Disney World with Eeny and Meeny (again here we are leaving Miny out). We had been planning the trip for a year as a “nice family vacation”. We had no idea how significant this trip would become in the coming months. We are grateful and can only see it as a part of God’s plan that somehow in the midst of the chaos and turmoil that Hubs’ diagnosis thrust on us we were still able to take this week and enjoy each other. We made memories and were able to take a break from the real world and visit “the happiest place on Earth.”

In the face of something like cancer you begin to center in on those things that are truly important. Bedtimes mean a little bit more and each smile seems a little bit brighter. You cherish and hold every single chance you get to make a memory. The superfluous pieces of life seem to simply fall away and you are left with those things you hold closest.

Life is the proverbial roller coaster and boy have we been on it.

As I write this letter we are on our way home from visiting the “North Pole” and riding on the Polar Express. Hubs made it through the worst of the chemo and is presently on a break. He has been able to resume a somewhat normal life and is getting stronger every day. There is a possibility he will continue treatments but at the moment that is an unanswered question. We will leave that decision up to God and our physicians. For now we are grateful for the strength and perseverance to get us this far. We are grateful for the hearts and hands that have wrapped us in prayer, in love, and in acts of service. We are truly blessed beyond measure in our friends and family.

We wish you all the Merriest of Merry Christmases!