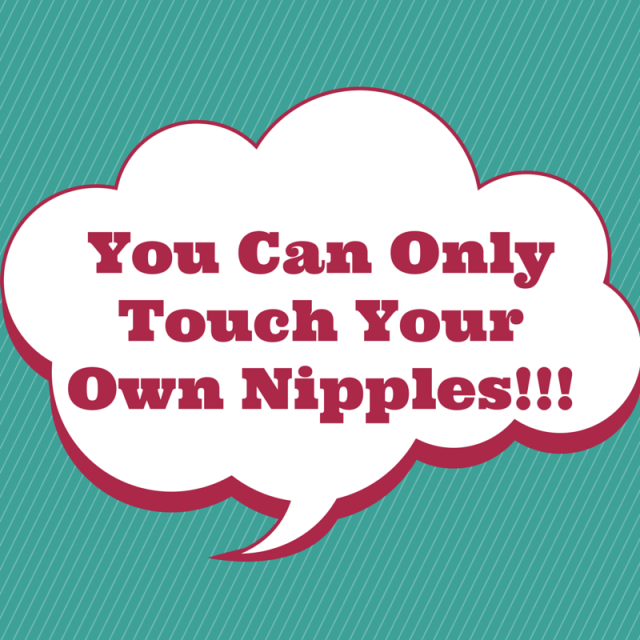 Is this just kids being weird? No. No it’s not. It’s my 4 YO employing one of the weirdest rules we have in my house. Here’s how it goes:

Before you throw something in the house you must first hit yourself in the head with it. If it hurts, it is not an acceptable object to throw.

You see, kids throw things. It’s in their nature. Telling my kids not to throw things is just too much to ask. So we had to devise a plan that their itty bitty kiddie brains could understand. Stuffed animals don’t hurt, therefore it’s ok to throw them. Blocks on the other hand can cause physical damage to their siblings and/or surroundings, therefore they are NOT ok to throw.

When my husband first employed this rule I thought it was hilarious (and somewhat ludicrous). But over time we have realized that it works. And it is an easily followed rule. It’s in their language and they get it. We try to keep our rules simple and succinct.

This brings me to the other weirdest rule we have in our house (and the quote I on my page that I get so many questions about).

You can only touch your own nipples.

Let me give you the back story on this one. One night after baths I was getting Meeny (4) dressed in his bed room. As he lay on the floor he began pinching with his nipples.

“Mommy? What are these bumps on my tummy?” he asked.

“Well,” I replied matter of factly. “Those are your nipples.”

He mulled this over for a second and then hit me with “Why do you have big nibbles and I have small nibbles?”

“Well,” I said stifling my snicker. “That’s just the way God made us.”

He seemed satisfied enough for a moment and then….

“WHY MOMMY WHYYYYYY? I JUST WANNA TOUCH YOUR BIG NIBBLES!!!!” and he began tugging at the neck of my shirt.

At this point I am batting him away in horror yet not missing the hilarity of the situation. I began laughing hysterically while simultaneously shrieking “NO!!!!!”

My laughter only fueled his antics as he began aggressively pushing, tugging, squirming, and groping. All the while screaming “I JUST WANNA TOUCH EM! JUST THE SIDE? I JUST TOUCH THE SIDE OF YOUR BIG NIBBLES!!!!”

Well, this stopped him in his tracks as he knows the importance of rules. He quickly lost interest in my nibbles and proceeded to busy himself with his Lego Ninjago car. I felt like we had appropriately [mostly] handled the situation and that no further explanation seemed to be needed. It was a rule and there’s not much more to say about it than that.

Well, that is, until hubby walked in the door from work and as Meeny ran to greet him with his signature overwhelming hugs he screamed out, “DADDY, YOU CAN ONLY TOUCH YOUR OWN NIBBLES!!!”

I wish I had the camera or the phone or some way to immortalize the look hubs gave me at hearing these words strung together. But without even giving him a second glance I nonchalantly replied, “Yeah, it’s a rule.” And I sauntered off to Eeny’s room leaving him in his bewilderment.

And that is the strangest rule we have at the Evans house.

4 thoughts on “You Can Only Touch Your Own Nipples!!!”