Last year I had the pleasure (*wink wink*) of being the “Team Mom” for my daughter’s cheerleading team. What this lofty position entails is a lot of relaying of messages, but also bathroom trips, bow straightening, hand holding, conflict resolution, tear wiping, and general “momming”. I even have an awesome t-shirt that reads “Don’t make me use my team mom voice” if you catch my drift. 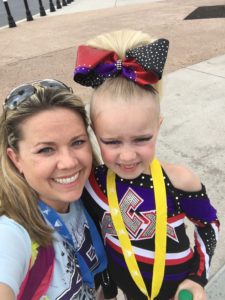 Well out of the 27 kids I was responsible for one of them had a severe peanut allergy and so my other duty was to carry around her Epi-pen just in case. After one of our competitions I forgot to return the Epi-pen to her mom but we spoke and she assured me it would be fine to just get it from me at the next practice in a few days. I didn’t want to forget to take it so I sat it on my kitchen counter as a visual reminder. I was careful to push it back out of reach though, as I have 3 very *shall we say* inquisitive children.

By the time a few days passed and it was time to head back to practice I almost forgot to take it. Thank goodness I had left it on the counter. I noticed when I picked it up that one of the syringes (it was a 2 pack) was popped out of the container and I couldn’t force it back in. Having absolutely zero experience with Epi-pens I didn’t really think much of it and dropped it in my purse and headed to the gym.

I was able to find the little girl’s dad and proudly handed over the pen. (I just might be known for being slightly scatterbrained these days and I was quite impressed with the fact that I remembered to take it with me AND find her dad.) He looked down at the half-opened container and then back up at me.

“Oh yeah,” I said “I’m not sure what’s wrong with it but I couldn’t get it to fit back in the case. It must’ve gotten jostled around in my backpack during the competition.”

His jaw hit the floor although he maintained his composure. “Um yeah, that couldn’t have happened in a backpack. This one has been used. There’s no medicine in it.”

Immediately I freaked. That meant that one of my kids (8, 6, and 3) had obviously gotten hold of it and accidentally injected themselves.

“I’m not sure,” he said worriedly.

I only panicked for a few minutes before I realized that my children were all perfectly fine and nothing seemed amiss. This is when the anger hit.

I marched all 3 of them right outside the gym and lined them up against the brick wall for an interrogation that made the Spanish Inquisition look like Jeopardy. Amazingly NONE of them knew how it had happened. No matter what I said or did they wouldn’t crack.

Defeated I strapped them into the car hissing threats as I returned into the gym to try and act like I’m not the worst mother in the world. I found the dad and gave him my phone number and asked him to let me know how to replace it. I just knew everyone was staring at me after overhearing that one of my children had injected themselves with someone else’s medicine. I could see the looks in their eyes- they were all wondering how in the world I could be responsible for 27 little cheerleaders if my kids were sharing needles and shooting up prescription drugs in my playroom.

We rode home in silence and they were all sent to their rooms until someone decided to tell the truth. None of them would give the others up. None. Despite the number of crime shows I watch I was unable to roll even the 3 year old. These kids were airtight and no one was saying a word.

A few days later the whole family was in the car heading home from Mother’s Day brunch when my husband somewhat randomly mentioned the Epi-pen.

“I’ve been meaning to ask you about that,” I said. “Do YOU know which one it was? Do you know what happened?” my heartbeat quickening with the thought of nailing the offender.

As I relayed the story to him detail by detail I could feel my face getting red with anger and embarrassment. I could feel all the other parents’ judgment on my skin again. My breathing was starting to become rapid as he reached over and placed his hand on mine.

“Um babe? I gotta tell you something….” he trailed off.

And then I knew who the real culprit was.

“You didn’t!!!” I yelled. “You used some other child’s medicine and didn’t even think to tell me about it?” My anger welled up inside me.

“I was just trying to figure out how it worked when it triggered,” he tried to explain.

“But the medicine was gone. It was used!”

“Yeah….I know. I barely touched that little red dot on it and the damned thing shot liquid all over me. I even had to change my shirt!” he said laughing.

That night I had the hubs google replacement Epi-pens and I watched silently as his eyes bugged out of his head at the price. Then I swallowed  my pride and apologized to the children for my mistake (and for their dad letting them take the fall for him).

I’d like to tie this up with a bow and have a nice “moral of the story” moment but honestly I got nuthin. Except maybe, before you blame your kids you should probably double-check with the oldest child in the house first.