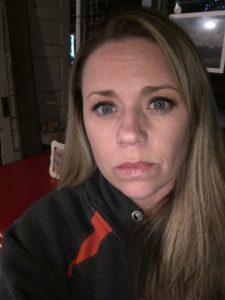 By July I had started to shed some of the extra 35 pounds I had put on over the past two years. By  September I was weaning my kids off the frozen corn dogs and pizzas they had been subsisting on for longer than I care to admit. I had started cooking real actual food again. By October I had quit my job of over 10 years to embark on a new journey with a new company. And now it’s December and I am beginning to remember what it’s like to actually live again. Not just to survive. I am learning the difference between acceptance and contentment and I am enjoying the latter for the first time in a long time.

When I think of PTSD I think of helicopters and IEDs and war heroes. I think of victims of violent crimes or abuses. Of witnesses to terror attacks. I don’t think of a thirtysomething working mom of 3 living in a sleepy rural town.

I don’t think of me.

I am not a war hero returning from Afghanistan after defending my country. I have never witnessed a mass shooting or been the victim of a violent crime.

You know what happened to me? My husband got cancer. Twice.

You can probably see the disconnect here. But it’s actually very common for cancer patients and their caregivers to suffer from PTSD. In fact it is estimated that 7.8% of Americans will suffer this affliction at some point in their lives. I am one of many.

Unfortunately hiding my diagnosis and keeping it a secret just perpetuated the spiral. I suffered panic attacks daily- sometimes hourly. I went through the deepest depression I have ever known. I cried rivers. I thought about dying. A lot. I stayed triggered and in a fight or flight response for 2 years- cortisol and adrenalin coursing through my body constantly. I put on weight and then cried about the weight and then hid because of the weight.

And then (after countless therapy sessions and drug protocols) I surrendered. I laid it down. And all the sudden I exhaled. I emptied myself of the hurt, the pain, the fear. And I began clawing my way back. I began building a life for myself.

And little by little I regained….me.

It’s still a struggle and a single email can still start my heart pounding and cause me to gasp for breath. But at this point it doesn’t tank me. I breathe, repeat my truths, let the tears out, share with someone, and let it pass.

I hope that by sharing this I can help just one person out there to be able to be honest about what they’re going through. To let them know they’re not alone. And it’s not shameful or strange. It’s very real and it’s very common. And there is a light at the end of the tunnel.

If you liked this post you might enjoy Diagnosed with Cancer: A Google Story or Walking through the valley

2 thoughts on “PTSD and Me”