Existing in the NICU is a surreal experience. You know the world is continuing to spin and people are living their lives like normal. But your world stops. Your world is confined to a unit on a hospital floor. Your only interactions are the nurses, doctors, and the cafeteria staff. During shift changes no parents were allowed on the floor so I would wander around the hospital exploring every hallway, nook, and cranny. I learned where the free ice machine was and the hours of the coffee kiosk.

After a few days I blended in with the machines and not even the nurses saw me anymore. I sat in the corner rocking my baby watching. I watched terrified parents arrive after emergency c-sections. I remember the night the thunderstorm came and the drop in the barometric pressure sent several women into labor at just 34 weeks. I watched each of those babies come in, stay for a time, and leave. We measured our success by the number of wires and tubes that were disconnected each day. 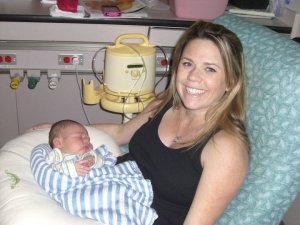 And finally there were no more to disconnect. It was a Friday. The hospital photographer came that morning to take our newborn photos as we were being sent home. We had a follow up scheduled with our pediatrician for the following Monday. And with no pomp or circumstance we were free.

That weekend was bliss and chaos all wrapped into one as we introduced our 2 year old to her baby brother. The visits began again as people streamed into the house to welcome Meeny home.

Monday came and I sent Eeny with a babysitter so I could take Meeny to his follow up appointment. My husband (having already missed so many days) was at work. Our pediatrician examined him head to toe and everything seemed to be fine. He mentioned that he was going to reach out to the neonatologist from the hospital to discuss something but he would call me later.

At 2 pm my phone rang. It was my pediatrician. He told me to take my son directly to the Children’s Hospital and that they had a bed waiting for him. They wanted to admit him for observation. I’m sure he gave me much more information than that but I couldn’t process anything else.

I frantically packed our things and jumped in the car. I called my husband in hysterics and he immediately left work to meet us at the hospital. I remember sitting at admission clutching my 11 day old newborn and sobbing. My husband finally came and we were ushered into a hospital room. There was a flurry of activity as the nurse hooked him up to an oxygen reader (I have no idea what the technical term is), they brought a tiny little hospital gown for him. I remember the “Happy Wheels” cart coming around to bring each child a toy. I just stared at her with tears streaming down my face as my husband absentmindedly picked up a book off the cart. It was a Dr Suess book that still sits on his bookshelf to this day.

This was a teaching hospital so we were subjected to a steady flow of doctors at all levels of their training every hour or so. Each one asked the same questions. Each one said the same thing.

That evening I was finally composed enough to call my mother and tell her where we were. Up to that point I knew I couldn’t make it through a phone conversation. She and my father immediately jumped in the car and drove to the hospital bringing dinner for me.

That night was another sleepless night. The nurses came in to check vitals ever 35 seconds it seemed and the constant beeping of the monitors kept me on edge. My husband was home with our daughter and so I was alone. I was afraid to leave the room- even to get water- because I didn’t feel like my baby was safe. He was so small. (Well, relatively speaking.)

Finally the next day an attending physician came in (this means the dr in charge). She began telling me why they wanted to observe him. She detailed several conditions (mostly heart related) that they were concerned about. However, she said they had ruled everything out.

In fact, what was actually wrong with him was that he was so fat his tiny little diaphragm wasn’t strong enough to lift up the weight to allow him to take deep breaths.

Yes, you read that right. My baby was too fat to breathe properly.

She said it was really nothing to worry about and within a few weeks his diaphragm would strengthen naturally and he would “grow into himself.”

So all of this angst. All of this terror. All of this MONEY. All boiled down to him being a Fatty McFatfat and that was all. THAT is the punchline.

Now I did learn some things from the experience- don’t think I walked away unchanged. The beauty of being in the NICU the first 8 days is that I had no one else to focus on. Nothing else to do. There was no laundry, no cleaning, no tv, no distraction. Just me and my child. I am grateful for the uninterrupted time we were able to spend in that first week. We very quickly developed a deep and unbreakable bond. As much as I hated being in the hospital for so long I am grateful for the time I got to spend with him. We had it easy and there are so many NICU moms out there don’t have a punchline to their story. Please remember them.

Meeny has lived up to his debut always causing a ruckus. He makes my heart skip a beat with his antics and takes my breath away with his sweetness. And now he is the smallest kid in his class. 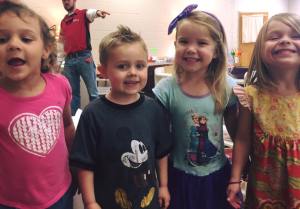