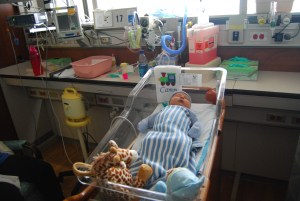 I was just finishing my first cup of coffee when they started. That familiar tightening in my belly. Slow, steady, strong.

I knew that this would be the day that we would welcome our little boy into the world. Having been through labor and delivery with my daughter I knew what to expect. I quickly jumped into the shower knowing it might be awhile before I would get this luxury again.

The contractions continued while I finished my shower and blow dried my hair. I called my husband to let him know he should probably wrap things up at work and head home. I decided to straighten my hair and apply some light makeup because pictures.

When he came home we calmly packed the car kissed our 2 year old goodbye and headed to the hospital. It was so different the second time around. I wasn’t scared or worried. I was excited.

We called my mother to give her the preliminary heads up. “But don’t come to the hospital yet,” we told her. I labored with my first child for 23 hours so we had no idea how long this one would be.

Of course when we got to the hospital and made our way up to the unit my mother was already there. She was unable to contain her excitement.

The labor was fairly easy and only lasted 8 hours this time and then just as quick as it started there was a beautiful (albeit giant) baby boy in my arms. He was pink and wriggling and screaming. He weighed in at 9 lbs 3 oz and man do I feel like I should get some sort of medal for that one!

All the family and friends showed up and trickled in and out of our revolving door of a hospital room to ooooh and ahhhh over the newest addition. Finally around 8 pm the visitors slowed, we turned down the lights, and had him all to ourselves. I never could go to sleep because I couldn’t keep myself from staring at him- watching his little mouth twitch and his eyelids flutter.

I began to doze on and off while my husband snored on the couch next to me. I began having nightmares that someone had stolen my baby and would awaken in a panic. I checked my watch as the hours ticked by and still no baby. I had a sense of dread I couldn’t shake. After two hours I shook my husband awake and asked him to go find our son. He returned with the nurse a few moments later.

“Some of his labs came back a little high and so his doctor has moved him to the Special Care Nursery [our version of the NICU]. I will let the doctor know you’d like to see him,” she assured me.

The next two hours I was a wreck. What did this mean? What was wrong? And more importantly WHERE THE HELL WAS MY BABY AND WHY COULDN’T I SEE HIM???

It was 4:30 am when they finally came to get us. We were lead down the winding halls through several sets of doors and finally buzzed into the unit. All I remember was seeing all the incubators and hearing the beeps of the machines. I frantically scanned the room trying to decipher which baby was mine. My eyes welled up with tears.

The neonatologist put her hand on my shoulder and led me over to one of the incubators. He was hooked up to more wires and IVs than I could count. I tried hard to listen to what she was saying but I could barely make out the words.

“Respiratory distress….elevated CRP level…..keep him for awhile,” was pretty much all I got out of the conversation.

“Can I stay with him?” Was all I could muster back.

They pulled a chair up next to the incubator and got me a pillow. “The next feeding is at 5 am,” they informed me. And then they left.

My husband and I sat there in the midst of the tubes, machines, the beeping and the buzzing not saying a word until the sun came up.

The next day was a complete blur and I don’t have any real timeline of events. What I do know is that they thought he may have some sort of infection. They decided to start him on an 8 day course of antibiotics which would keep him in the NICU for at least a week. What this also meant is that I would be discharged the next day and sent home without my baby.

There are no words to describe the feeling of dragging your wrecked post-partum body out of the bed to pack your things into the car and return home alone. The hospital didn’t have any rooms I could stay in to be near him and we live about 45 minutes away.

We came home numb. I quickly took a shower and packed a small bag. We grabbed some fast food and headed back to the hospital. That night my husband and I slept on the floor in the waiting room of the hospital. I set my alarm on my phone for every 3 hours and dragged myself to the barricaded door of the unit to get buzzed in for every feeding. I’m not sure how many days or nights we spent in the waiting room but I can tell you I never missed a feeding. During the day I was allowed to stay in the unit with him and I spent countless hours holding him listening to the steady beeps from his heart monitor.