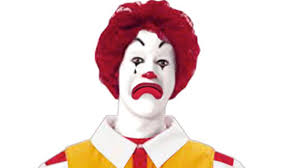 My first job some 20 years ago was working in a fast food joint. It’s almost a rite of passage for an American teen these days and quite frankly I’m probably better for it. The only thing is- I had hoped that after 20 years, several years of higher education, and several jobs later that portion of my life would be over. I have served my time in the trenches and I should be on to bigger and better things. And I thought I was. Until I realized that I wasn’t. Sadly, very little separates being a mom and working at McDonalds. Case in point…

1. It sure as hell isn’t Burger King.

I can’t tell you the last time someone in my house got to “Have it your way.”

Unless my bank reverses its decision regarding accepting macaroni pictures for a mortgage payment. In which case, I’m rolling in it.

3. The trash ALWAYS need to be taken out.

How can these tiny little creatures create so much garbage?! Despite the fact that I take the trash out 875 times a day my house still continues to look like a scene from Wall-E.

4. There are cheap plastic toys EVERYWHERE.

It’s like they copulate and multiply while we’re sleeping.

This is one of those “joys” that comes with having boys.

6. Someone ALWAYS wants something that’s not on the menu.

Whether the request is watermelon in December or Crab Rangoon for breakfast there will always be some sort of request that I will not be able to accommodate.

7. At any given time there are at least 3 different people barking orders at me.

From 3 different directions. In varying degrees of decibel levels. This brings multi-tasking to a whole new freaking level.

That’s right. Someone is always up. And it’s usually me.

9. There is always some random guy “on a break” despite the million tasks that need to be completed.

Ok so the hubs might get mad about this one but how can one simply lean against the counter scrolling through your iPhone with “ALL THIS WORK TO DO!!!” As my old manager used to say “You got time to lean? You got time to clean.”

Motherhood is an exercise in customer service self control. Instead of banshee screaming the horrible words pounding inside my skull I simply bend down, smile, and explain very very calmly why it’s NEVER ok to pee in someone’s mouth.

11. The uniform is unflattering.

Unless of course you have a thing for no makeup, dirty messy hair, tired black circles under your eyes, baggy sweatpants, and an old t-shirt covered in someone else’s puke. If you do then I am totally your girl.

12. There is always some creepy guy making inappropriate comments.

Okay so it’s my 3 YO son-but his obsession with nipples and pee-holes is getting to be just a little too much these days. Like can’t we just go 24 hours without discussing some sort of private part?

13. We are always out of something.

My husband likes to play a little game called “Don’t tell her what we’re out of until AFTER she comes home from the grocery store.” This leads to a perpetual state of being out of something. I have finally just given up hope that we will ever be fully stocked.

In the car, under the bed, in between the couch cushions- french fries everywhere. The weird thing is we hardly ever even eat french fries. How am I still finding them?! It’s the 8th wonder of the world.

15. Everything is weirdly sticky.

It’s like someone has replaced the 409 with maple syrup. No matter how many times I wipe down the counters and the tables everything remains inexplicably sticky.

Depsite the trials, the tribulations, the smells, the messes, the exhaustion I wouldn’t change a damned thing. I truly am LOVING it!!

So there you have it. The circle of life. And 20 years later I’m still in the trenches and practically slinging burgers.

One thought on “Motherhood and McDonald’s: It’s really all the same”