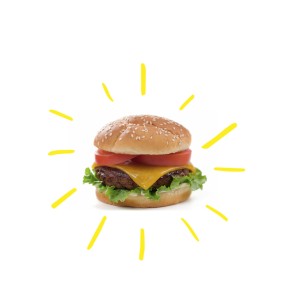 I don’t feel stressed. I mean I know I should be but I just don’t feel like it. Maybe my threshold has just increased. Maybe I’ve become immune. I mean when my new babysitter who was supposed to start on Monday at 8:30 am called me on Friday at 2 pm to tell me she can’t watch the kids I didn’t even bat an eye. It was the same level of annoyance as when my free xm subscription expired earlier that day. I mean it sucks but it’s merely annoying. It’s not the end of the world.

Normally something like this would send me into a full blown panic. I was beginning to feel proud of myself and how I can now take such crises in stride. I’m really getting the hang of this thing. I even [sort of] saw it as a blessing. “Another chance to spend some extra time with the kids might be nice,” I thought. I have truly grown as a person and I am expanding my horizons.

And then I went to Hardees.

I had everything planned out for the flawless execution of my day. After K’s morning nap we would get into the car and head to the hubs’ work to pick up the dog since we had dinner plans with his parents that night. I even thought “Heck, it might be nice to pick up lunch for him on our way.” So I called and surprised hubby with our offer to drive through Hardees and eat lunch with him. Now anyone who has ever had a baby knows the importance of squeezing errands in between nap times. There is the kiss of death if my children fall asleep in the car. Even if it’s only been 20 seconds they awake thinking they have had their nap and they should now be allowed to play. So I’m a little psycho about nap times. Okay, a lot psycho about nap times.

But we had enough time if only just. So we pull into the line at Hardees which was a bit long but this is fast food right? It took about 5 minutes to get to the squawk box where we quickly placed our order. Nothing crazy or difficult- just two number twos. We then waited another 10 minutes before we got to the window and paid. At this point I began nervously checking the clock. We would now only have 30 minutes to get to hubs’ work and eat. This is doable.

Then the drive thru girl came back and asked me to pull forward. I grudgingly oblige. This was when I began to time the ordeal. Please note this was also when time began moving in slow motion. I tried to distract myself by checking FB. After reading the entire newsfeed I switched over to instagram. Having exhausted my social media networks I checked the clock again. We had now been sitting for a total of 20 minutes since ordering. I could feel my anxiety rising.

I quickly did the math. I now had only 20 minutes till it was time to head back home. “It’s okay,” I soothed myself. I had now switched over to pinterest and was alternating between searching clever homemade valentines and counting the number of cars who had ordered and left since I had been sitting.

I started to wonder if they forgot about me. I started to wonder what all these people had ordered that was so readily available yet my cheeseburger was not yet ready. I mean what else do they even serve at Hardees? There had been 12 cars that had ordered, paid, and received food since I pulled forward. What could they possible have gotten? Surely someone out of those 12 cars had ordered a cheeseburger. Maybe they ordered a different size cheeseburger. I had ordered 1/4 pound burgers. Maybe those other people were ordering 1/3 or 1/2 pounders. Surely they couldn’t have all just ordered drinks. I knew it couldn’t just be the fries holding us up. I know how long it takes to drop a basket of fries and it’s not 30 minutes. “We’ve been here 30 minutes!!!!!”

At this point I can feel my face flush with anger. They have ruined my lunch. I will not have time to sit down and talk with hubs. This will probably ruin the baby’s nap which is a short nap anyway since RJ and DC have to be picked up from school.

The seconds ticked by. I felt my heart pounding in my chest and the blood rushed in my ears. Two more minutes crawled by. Every time the door opened I sat straight up like a prairie dog to see if it was my food. I start texting Ziggy.

“There is nothing fast about the food at Hardees.”

“I’m so angry I could scream.”

“If I hadn’t already paid I would leave.”

And then it got darker.

“You should never come back here.”

And it was real. These feelings were so real they were palpable. It was a burning hatred.

As I was contemplating marching in to “speak” [yell] to the manager the door opened and the drive thru girl emerged with a bag of food. She casually sauntered up to my car and half threw, half dropped the bag into my lap. I swear she rolled her eyes as she did it. And without saying a word she turned and walked away.

Now that was almost too much. Not a “I’m sorry about the wait ma’am.” Not a “Thank you for your patience.” Nothing. NO-THING.

My blood boiled and I wished horrible things on her. If I could have hexed her I would’ve. I angrily threw my car into gear and stomped on the gas. Furious. She had ruined my day. Now it was a total waste, a total loss. “I hate her,” I growled. And I did. I had never felt such burning anger toward a single human being in all my life.

I spent the next few hours stewing in my own batch of “I hate you” soup and lashing out at everyone including hubby. I slung his food at him when we walked into his office. I was angry that it was HIS lunch that had caused me to go to Hardees in the first place. If it hadn’t been for HIM I wouldn’t have been subjected to such an outrage.

It wasn’t until much later when I was recounting the atrocity to a friend [and she was hysterically laughing at my reaction] that I realized maybe it wasn’t about the cheeseburger at all. Maybe, just maybe, the cheeseburger was the straw and I was the camel.

And suddenly it all came into focus and I too realized how wildly disproportionate [and misplaced] my anger was.

We all have these moments though. The ones where we lose our footing. Lose our sanity. (At least I hope it’s not just me.) It feels so real at the time. I can only thank God that I have dear friends to pull me out of my delirium. And I hope you do too. We all need someone to slap us across the face every once in awhile and yell

“IT’S NOT ABOUT THE CHEESEBURGER!!!!”