We are awoken at first light. It’s amazing to me that we struggle to get out of bed every morning with our alarm clocks at home but here on vacation with no alarms set we are up at sunrise. As soon as we open the cabin door we are greeted by Cheesecake asking for “an eye opener” (a beer). He reminds me of a stray animal that you made the mistake of feeding that one time and now it follows you around everywhere you go. It’s clear to me that The Gravy has become his gravy train.

We oblige and give him the beer despite the fact that it’s only about 7 am and we ask him to bring us 4 bags of ice from the coolers at the office. When he is bringing the first 2 bags back the other dock hands begin yelling at him saying “You ought not be doing that man- where you goin’?” He points to us and the other dockhand quickly runs down the dock to our boat and explains to us that Cheesecake, in fact, doesn’t work at the marina- he just hangs around getting scraps from the unknowing tourists.

We spend most of the morning waiting out a storm at the docks. Boats continue to pour into the harbor and there are reports of bad weather and water spouts off the coast. We fry some bacon and eggs and just relax at the dock. We make friends with a group of 5 couples who made the crossing in 5 tiny boats. They are camping on their boats sleeping in the open as the tiny things don’t have any cabins. They are from Maryland although one of the couples actually owns a house on the lake only 10 minutes away from where we live. I am struck by the smallness of the world.

The storm clears around lunchtime and we head out to a shipwreck just off the coast of South Bimini. The water is too rough to swim or snorkel so we bottom fish for a few hours catching another 4 reef runners. We decide to give 2 of them to Cheesecake and to grill the other 2 for dinner. 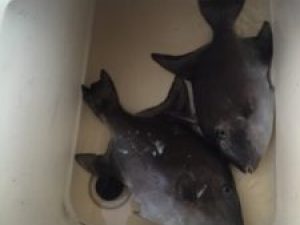 We return to the dock around dinner time- we have long since abandoned our watches and are telling time by the position of the sun and the rumble in our bellies. We decide to get fuel in preparation for the 90 mile crossing tomorrow and head to the fuel docks only to discover there is no fuel- they ran out and we must wait for the fuel boat to come. It’s something you don’t think of really-that on an island resources are limited and must be brought in by tankers a few times a week. We also learn that all the marinas on the island have run out of ice.

We head back to Brown’s to dock, open a bottle of wine, and grill our dinner on the barbecue just off the docks. We spend the evening with the crew from Maryland as if we have known each other for years.

We eat and crawl back into the cabin. Early to bed, early to rise.

Read the beginning of our journey in Day 1: First Crossing West Palm to Bimini