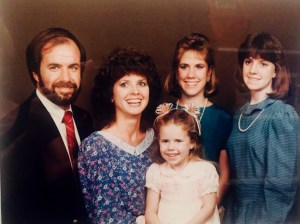 I am a part of the Olan Mills generation. You know what I’m talking about right? Where every year we had to dress up in our Sunday best and make our way to the tiny studio downtown studio for our annual family photo. We snuggled bunnies on the brown shag carpet, sat in white wicker chairs, and smiled sweetly in front of the bookshelf backdrop. Each time my mother would collect her “free 8×10 family photo” without purchasing any others and we would leave. (On a side note my mother still proudly displays all of those 8x10s in her house.)

So as I grew up and started my own family I continued the tradition. Only now there is no Olan Mills studio in town. I spent several years going to the Picture People in the mall and they did a fantastic job but I still felt like we were missing something. We were missing the intimate dimly lit studio and it had been replaced with giant plate glass windows over looking a food court.

One day I was expressing my frustration to a friend when he told me “My wife always takes our whole family to Sears and they do an amazing job!”

Well, I know what you’re thinking because I was thinking it too. I mean Sears is the only place I know of where you can buy a treadmill, a dishwasher, a pair of jeans, and have a family portrait all in the same place. I looked at him skeptically. He emphatically sang their praises urging me to “just give it a try”. Ultimately he wore me down and I called and booked the sitting.

There are few things in life that make me hate my family as much as a portrait sitting. I have the screaming 7 week old, the terrible-two year old, and the disgruntled husband. We spend the majority of the time forcing gigantic smiles while gritting our teeth and checking our watches. We usually end up with some horrible picture where no one looks quite right that immortalizes one of the biggest fights we’ve had in our marriage.

This photo shoot would be no different. Add to this the fact that as a result of the 7 week old I wasn’t feeling “pretty” if you will. I was still puffy from the delivery (it WAS still from delivery because this fat face sure as hell can’t be permanent) and I was toting more than a few extra pounds. But I knew we had to power through before we were out of the newborn stage and would have no pictures to show.

Oh and did I mention that the air conditioner in the studio was broken on this particular day. And that it was July. In South Carolina.

You know there are actually psychological studies done on the impact of heat in aggressive behavior? In case you’re wondering the temperature is DIRECTLY related to mood.

We struggled through the shoot. And despite it all we did not file divorce papers at the end of it. But I will say we were in such a hurry to get the hell out of there that I was really only half paying attention when we went through the proofs. All I wanted was a large portrait to hang in my breakfast room- maybe a 16 x 20 size.

I wrote the check bouncing the baby while he desperately rooted around trying to find my boob. The hubs was chasing/fighting the 2 year old switching violently between bribes and threats to coerce some sort of compliance. And finally, we were done and we high-tailed it out of there. The portrait would come in about 2 weeks.

When I finally got the call that our portrait had arrived I was informed that “Ma’am the size was put into the computer wrong and it came in a little bigger than you wanted.”

I agreed to come down to the studio and see if it would work. When I entered the studio I was greeted by a life-sized portrait of my fat swollen post baby body. In fact, it may have been a little larger than life-sized. It was HUMONGOUS. You know the self portrait that Scarlet O’hara (from Gone with the Wind) had hanging over her mantle? Well this was twice that size.

I screamed a little when I saw it and informed the girl that this portrait was in NO WAY acceptable and that I would just prefer to have the original size. She assured me they would send it back and would re-order the correct size. I left feeling satisfied.

About a week later I received a text message from a friend. “Modeling for Sears now?” was all it said. Attached was a picture of the giant monstrosity on an easel on display just outside of the entrance to Sears in the middle of the freaking mall.

ON AN EASEL IN THE MIDDLE OF THE FREAKING MALL!!!!!

Who knows how long it had been up or how many people had seen it. In fact, I’d rather not know. What I do know is I need to find a new mall. Or perhaps a new hometown.

2 thoughts on “The Olan Mills Generation”